4 The Love of Puck

For most of us, there is nothing better than our weekly beer league game. The hour skate, then the post-game beers and meals with teammates is something special for all us. There are two guys who are hoping to capture what makes these few hours each week special. That is where Casimir Semlak and Adam Howard come in with their documentary project, 4 The Love of Puck. 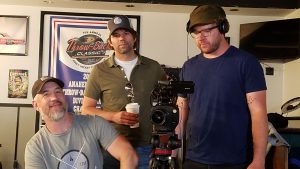 4 The Love of Puck is an upcoming documentary about hockey and the community it creates.  Cas and Adam have been working in the planning stages and just started filming a few weeks ago! They are going to several locations to capture what beer league is like for all different kinds of players. The guys will be filming in their native, Minnesota as well as Wisconsin, California, Ontario, Florida and even all over Europe! They are committed to bringing a full-length documentary that shows the hockey community as a whole!

This documentary will feature all different types of hockey. From outdoor roller hockey games to playing in Europe during a hockey tournament that is located high up in the Swiss Alps! Cas and Adam are dedicated to helping show why people love playing the game at all skill levels.

Cas and Adam are hoping that this documentary shows that no matter where you play that in the end, all roads lead to beer league hockey!

If you wish to help support their project, find them on Kickstarter here!

Learn more about the project on the Totally Offsides Podcast