Hockey businesses come in all shapes and sizes. This blog features all different kinds that have carved out quite a niche. One that I haven’t covered yet is a repair shop or hockey store or repair shop. This is where Bay Area Hockey Repair (BAHR) comes in. Essan, the owner, is living proof that through hard work and his craftsmanship, he has carved out a niche business, and made his BAHR store, a destination for all kinds of hockey players.

Essan was born in the Philippines and immigrated to Nevada, Missouri in 1993. He saw his first ice hockey game and saw Arturs Irbe fixing his gear on TV, and became instantly hooked. He became a fan of the Kansas City Blades and got to take in his first real-life hockey game later that year.  Eventually, Essan’s family moved from Missouri to San Jose, California. It was in San Jose, where Essan finally got to play hockey for the first time. He ended up taking the bus to Gremic roller hockey in Japantown San Jose, by Foster Freeze and worked there to repair equipment. Essan used his money to save up and buy his own equipment instead of buying a webtv like his friends. He bought a new Heaton Helite IV Brodeur spec blocker instead, all without his mother knowing! Essan continued working several jobs at various rinks in the area to get his full set of goalie equipment. Essan’s parents eventually found out he played hockey by receiving a phone call saying he made the Santa Clara Valley Blackhawks on scholarship for midget hockey. Essan eventually went to art school and still worked at Hockey Workout while attending school. He left school in 2002, but still was involved with hockey. However, after a 5th concussion, and graduation, he stepped away for a bit. 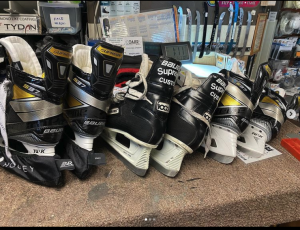 Essan started BAHR or Bay Area Hockey Repair & Sharpening, in 2011 by getting a pair of Koho 560 leg pads, fixing them with his old sewing kit, and reselling it for a profit.This was the catalyst that started BAHR. Essan revived his sewing and repair skills and reached out to several former teams, players, and friends to let them know he was back, and created a business that repaired hockey equipment.  As his business grew, he moved out of the Jeep and into a shop. BAHR has since repaired over 50,000 pieces of equipment!

BAHR is known as a repair shop. It also sells equipment but if you’re looking to revive your pads or skates, Essan is known to be one of the best! In addition to the repair side of things, Essan has made several hockey products including luxury skate guards, goalie pad risers, and goalie pad knee stack covers. Along with his hockey products, he also made masks for the Covid-19 pandemic. Essan has created a mail-in skate sharpening program, where several players from all over the world, including some pro leagues, mail their steel into BAHR for top-notch sharpening service. Essan has truly created a one-of-a-kind hockey business. Essan’s business can speak for itself with pictures and testimonials from customers of all levels all over the store.  His store itself is like a time capsule with products, signs, and brands from all eras of hockey. It is also about to be very busy as a new multi-sheet facility is about to open across the street. He also has customers from not only California, but the world, to stop in and see him! Essan has made BAHR a destination for all hockey players!  Essan survived the Covid pandemic at the epicenter of where it all got shut down, and just recently, lifted all restrictions, witnessing Shark’s Ice across the street shut down for months at a time. There have been no travel teams and tournaments have been almost non-existent for most of the last 2 years! Essan doesn’t believe he’s the best. He is pragmatic in his approach and is consistently solving problems the correct way. Passing on his knowledge, treating his business as an educational tool hopes to evoke his roots to rec players, parents, coaches, to professionals  – he just wanted to play hockey.

Hockey businesses come in all forms. Bay Area Hockey Repair is proof that through hard work, you can carve out your own niche and create a one-of-a-kind shop to attract hockey players of all levels!