What is a new product, in the last few years, that has gotten attention from players of all levels, and can be seen from the NHL to local high school players? If you thought of Bladetech steel, you would be right! Bladetech is a new product that is helping give players an advantage by acting as a flexible piece of steel, thus keeping blade contact on the ice longer to give a more powerful stride!

Getting to where Bladetech is now, was a long road and a lot of hard work. It started as a project in 2013, in an engineering school for the founder, Jeff who wanted to do something different than the other students for his final project.

He started the project, by seeing that in hockey skates that there was not much difference between the steel in the holder from the $100 skate to the $1,000 skate. Sure you get the quick release steel, and maybe better quality that can hold an edge better, but there wasn’t much with performance. This gave Jeff the idea of trying to create something similar for hockey as a speed skate.

In speed skating, some of the skate’s blade comes off the heel to extend the length of your stride making it more powerful. This got Jeff thinking that you could do something similar in hockey. Though, the steel couldn’t extend that far and would have to be very fast since hockey is played in short bursts, unlike speed skating. So, Jeff went to work on creating a product that could move with the skate, and give an increase to performance.

The prototype that Jeff created and turned in for his project was a unique holder that was spring-loaded in the front part of the skate. Most of the holders by then had a piece in the heel that was removable for steel to come out, and Jeff’s holder had a spring in the front. This allowed for there to be more power and a longer stride.

Jeff was attending a sports tradeshow and demoing his new holder at the conference. He was giving a presentation and it got the attention of Anthony. Anthony had a business background and thought that Jeff had a good idea. So, Anthony emailed Jeff the day after the conference to say that he really thought he was onto something with a spring-loaded holder, but thought there could be a better way to achieve the same benefits.

When he emailed Jeff and said he thought he had something, he wanted to be the business side of the product. If you think of the best “startups” there is always the business side and the engineering side. Apple, Steve Wozniak had Steve Jobs… Facebook had Mark Zuckerberg and Sean Parker and the list can go on and on.

When they met, Anthony said he really liked the idea, and that there could be a business behind the idea. However, the idea needed to be fleshed out a bit more. A spring-loaded holder wouldn’t work, and that it would be too complicated since steel breaks, and springs can rust.

Jeff came up with a design that would allow the steel to get pushed up into the holder from its shape, and not via spring. He realized that most holders have the same shape / hook up front for the steel, and that with a cut into the steel it can “flex” up into the holder. This gives that spring effect that Jeff wanted to achieve in his first design. This also suited Anthony because there wasn’t a special holder…it was all done via the steel. 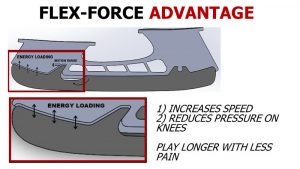 Bringing it to market

Now, with a new product, the first thing to do was look at the use cases. Anthony knew that if they were going to be successful, they needed to be able to make steel for every hockey skate.

They filed a utility patent to protect their newly created “Flex Force Advantage” technology. This solidified their unique offering to the hockey world and differentiated them from all other steel. After getting their patent made, the next task was to take it to the NHL and see if the pros would use it at the highest level.

It’s 2018 and Bladetech has been around for a few years. Jeff and Anthony are still trying to see if it was going to be a larger business. They have started getting their product into a few NHL players, and it’s not really out for sale yet. However, things were about to change. Some of the Washington Capitals players were playing on Bladetech’s steel. Those players told their teammates. This led to the Capitals placing an order for 60 sets of steel for the end of their season. This wiped out the supply that the guys had! It was then, that Anthony and Jeff knew their product was working. 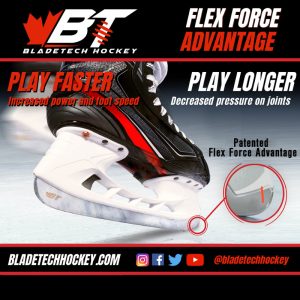 What’s next for Bladetech?

After the Capitals and other pros started using their product, they started making their product available to the masses. Their steel can be seen at all levels across North America and Europe! They are one of the title sponsors of the NWHL and during the Covid-19, they thrived. Their business has more than doubled in the last couple of years!

Anthony is proud to say that they were able to bootstrap the company. He became the first full-time employee in 2020. In the future, they are hoping to do more advertising to help spread the word about Bladetech. They also see themselves interested in working directly with skate manufacturers. That way, perhaps in the future, we would see Bladetech on the $1,000 skates.

There isn’t much new that happens in hockey… when something does, it’s usually a game-changer for the good. Bladetech is helping move hockey forward by having a longer stride from a piece of steel that acts like it’s spring-loaded, it’s quite the game changer! 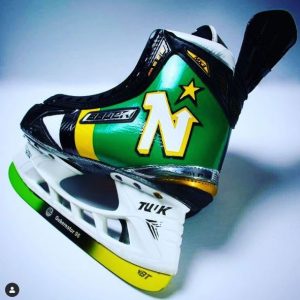