What is the most important piece of equipment for hockey players? For most players, it’s their sticks. A stick can be one of the most personal pieces of equipment. Think of it … a player prefers a specific blade pattern, shaft texture, length, and grip. It is the grip portion of a player’s stick, where Buttendz is taking over. Buttendz gives players a new type of grip for their stick. It allows players to get a better grip that allows for better feel and control, and dampens vibrations all at the top end of the stick!

There has to be a better grip. 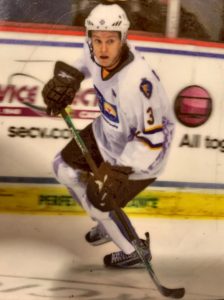 Buttendz was founded by Rob LaLonde, a  hockey player, (and a really good one) who thought of the idea for Buttendz in the mid-2000s while attending college. All throughout his life, he has been very particular about his equipment, everything from gloves and skates, down to his stick. This led him to believe that there had to be a better way to make a tape knob or a better material to give players a better grip and better feel.

While playing college and in the minor leagues, Rob kept doing homework on the product. He asked guys what he thought about having a new, special grip, other than tape at the end of their stick. He also started reading business books and educating himself about being an entrepreneur. He knew there would be a day when hockey would come to an end, and he wanted Buttendz to be his “after hockey” plan. So while playing games at night, and grinding away at a pro hockey career in the AHL and ECHL, by day he was putting things together to lead him to create Buttendz.

During his last year in the pros, Rob decided to get more involved in the business side of things. He started going to business events in Reading, the city he was playing in and learning from small business owners. It was in this last season of his pro career he started putting all of his feedback and homework he had done over the years to use and thinking about his after hockey plan.

While thinking he had a little more time to perfect the idea and becoming a member of the growing Reading business community, Rob’s pro hockey career, unfortunately, came to a quick end. He ended up getting hit from behind and that hit ended up giving him some issues that forced him into early retirement. With a sudden end to his hockey career, Rob didn’t have Buttendz in place to start right away. So with being out of playing hockey, Rob was forced to look for something different that would allow him to generate an income while creating Buttendz.

In 2011 after retiring from hockey, Rob was offered a job in New York city selling office copiers. Rob accepted the job for the opportunity to do two things, move to New York and fine-tune his selling skills. While working as a salesman by day, he would work on Buttendz at night.

When Rob first started he tried patenting ideas and getting a legal team involved early in the process. He wanted to make sure his ideas were protected, but it almost cost him. He found out that patents and lawyers are very expensive. It felt like he was in over his head and decided it was back to the drawing board.

While trying to figure out his next move, he was telling a friend, Kevin Lonergan, about his idea for Buttendz. Kevin already had a successful background in finance. He found that Rob’s passion for his product, and that his company could be a game-changer in hockey.  Kevin loved the idea of being involved with Buttendz. Over the course of several meetings, Kevin became a partner and helped officially start Buttendz. With Kevin’s finance background, he could help Rob’s product get off the ground. Now with Kevin onboard and a solid direction, they could start making Rob’s product. 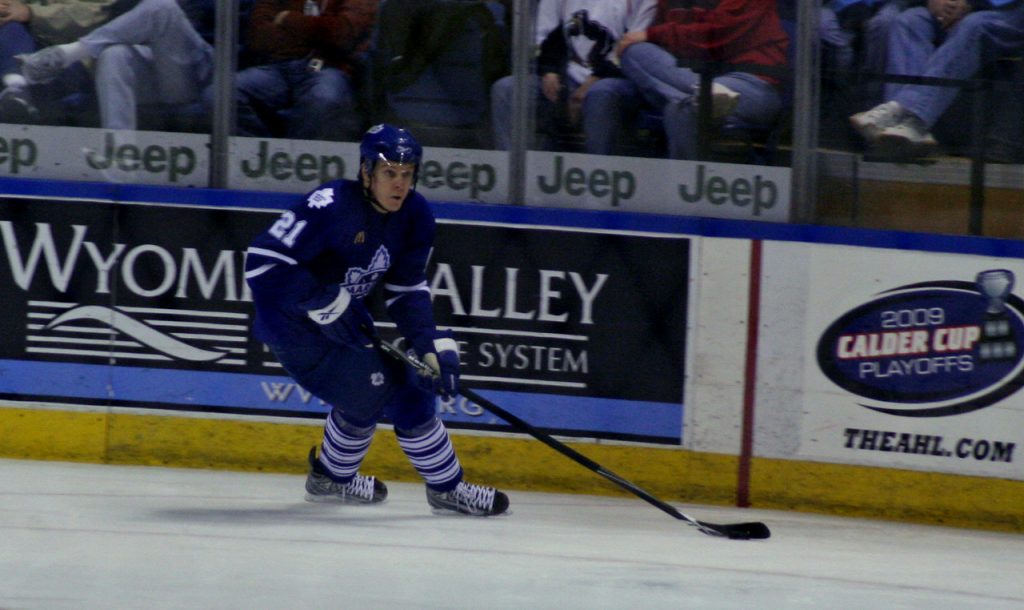 After getting a partner and some direction, Rob and Kevin were ready to go. They got to meet with a designer to create the product that Rob envisioned for so many years. While with the designer, they designed everything about the product. They came up with a logo, the colors, the signature drop down the grip, and the texture that is throughout the grip. They had the design and now needed to source where he could build the product.

Now with a product designed, the pair needed to team up and source manufacturers. When they found a few manufacturers that could do the design, the next step was to request material samples. The factory that they wanted to work with, sent about a dozen of materials for Rob and Kevin to review. After carefully selecting the material, they sent the design over to the selected factory. Then a few weeks later, the factory sent over the first prototype.

When getting the first prototype, Rob was able to take it out right away and try it on one of his sticks to test. However, it wasn’t right. There were a few small issues with the design and how it worked. So the pair went back and tweaked the design just a bit. Then they sent over the changes to the manufacturer. After refining his design, they received a second batch of prototypes. It was just right! When Rob tested the new prototype, he could use the grip just like he imagined. Now, in just over two years after an early retirement from playing, Rob had his product in hand. Now he and Kevin could start having others use the grip. 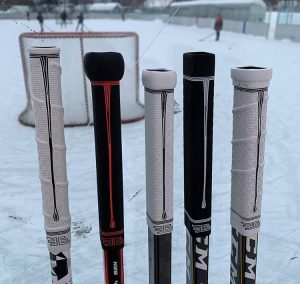 With a new product that no one had ever seen, they had to get it into customer’s hands. Rob had a lot of connections in the hockey community. He thought who better to be the first test person than an NHL player? Rob used his connections to get in touch with Brandon Prust, a then member of the Montreal Canadiens. Brandon said he would be willing to try his grip if he could get him a few to test.

After getting word that Brandon was interested, Rob knew that the Canadiens would be close by in Philadelphia. Rob packed up a few grips and took a train down to Philadelphia and met Brandon in the team hotel. He showed Brandon all the Flux grips that were made and gave them to the Canadien’s player to try out.

The next night, Rob was in the stands near the Habs bench as they came out to warm up. Right away, Brandon located Rob in the stands and pointed at the butt end of his stick. It had a new Buttendz grip on! Brandon Prust was the first person ever to use a Buttendz grip!

(Now, Buttendz can be seen all over in the NHL) 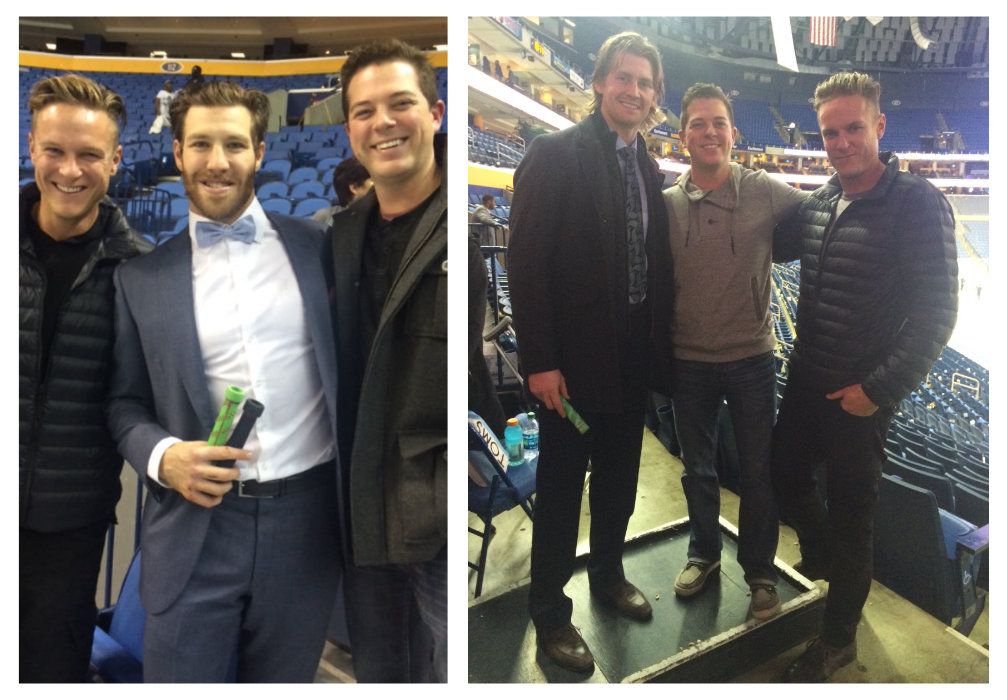 Buttendz had their first user, and it was a player at the highest level. However, it wasn’t enough. Buttendz had a pro user but it didn’t spread as they had hoped in the NHL. Rob and Kevin had to now strategize how to get his product out.

They decided to go back to their childhood home of Buffalo, where they had connections into a lot of youth programs. They would get on the ice with several programs that the two had contacts with to talk to kids about Buttendz. Rob and Kevin would let the players try the grip, and then after practice, sell the grips.

This idea worked! Buttendz had a lot of players around the upstate New York area using their grips! With so many youth players in Buffalo liking the grips, the thought about taking the show on the road seemed like a great idea. They could sell the grips exactly the way they did in Buffalo, except at tournaments. They decided to book booth space at a big Peewee tournament in Toronto.

At the Toronto tournament, it was their first major youth event. Buttendz was the talk of all the players. They had several demo sticks for kids to try. Their product caught the eyes of both kids and adults. By the end of the weekend, Buttendz was sold out! Buttendz was a success and the products kept growing. 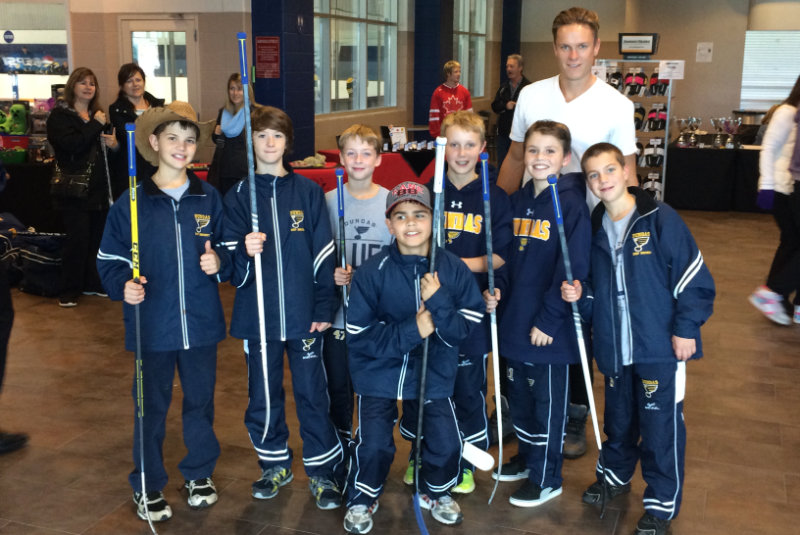 The company still has a guerrilla-style of business. Rob constantly travels to tournaments and showcases to tell players about his product. In addition to attending events where players are, he attends industry trade shows like the Let’s Play Hockey Expo. These events allow Rob to show Buttendz to a larger audience.

This tactic is working! Buttendz keeps growing. Rob is constantly online and in social media talking to players and promoting his grips. He loves going to games of all skill levels. He enjoys seeing players whether its an NHL guy or a peewee going bar down using their Buttendz grip!

Rob is based out of New York City. He sees Buttendz keeping on growing. He loves that Buttendz has created a community that shares his passion for equipment and hockey. Buttendz keeps designing new grips too. The company has also expanded into suppliers too. You don’t have to find Rob at a showcase or trade show now to buy his grip. Most hockey stores like Pure Hockey, and Hockey Monkey, carry his grips! Rob has done a great job of creating a product and connecting with his community and it keeps growing!

A hockey stick is very personal to a player. Do you cut it, is it the right pattern, grip or non-grip? Now Buttendz gives players a new type of grip for their stick. It allows players to get a better grip that allows for better feel and control, and dampens vibrations all at the top end of the stick!