Hockey Community – Giving everyone a chance to play

Have you ever wanted to play more hockey? Did you ever have a free night and say to yourself “I wish I had a game to play tonight!” Well bring back the 2009 saying, there’s an app for that. The app is the Hockey Community and it has a website too. Hockey Community isn’t just for finding games, it’s an app that empowers its users to help grow the game of hockey through creating events such as tournaments and games, to requesting players, to having a news feed where members can come chime in about hockey.

Hockey Community started out as a project for founder Alex Toul who moved to Vancouver. He wanted to make more friends and play more hockey (don’t we all?). The app started as a website where players could post open games and skates where others could jump in and play. This allowed for groups to be filled and more people, including Alex, the ability to find more hockey.

As the site grew Alex, partnered with his co-founder and good friend Ryan, to appify the Hockey Community. Having a website and an app, made things easier. The app could provide an easier experience and a new platform to organize and create hockey events. This helped users create more events which in turn, attracted more players and in turn growing the community.

As the community grew, so did the app and its offerings. In addition to having the ability to create events such as needing a player to fill in for your 10:15 pm game, or your drop-in skate over lunch, you can create your own team, post and interact with other members, and even sell your gently used gear for sale! With all of these features, the Hockey Community was really starting to take off!

On top of being the social platform to find games and meet people, they added more tools to help players and organizers. They now allow players to pre-pay for events and accept league online payments through the app. In addition to that, they were able to create a software suite for tournaments and league to utilize to help run their events. These additions have helped Hockey Community focus on growing hockey through events and tournaments, everything that makes hockey fun. 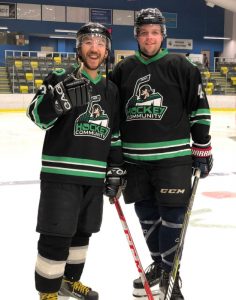 The Hockey Community is going strong. It just surpassed 100,000 members! While the team is thrilled about that, they are not sitting back. They have several ideas for the future! One of the ideas is the ability to endorse a player’s skills. This idea is that you could say that a player was good at passing or a good guy for the dressing room. That way if you have a new player show up, you could know what type of player is coming. In addition to that, the Hockey Community is going to start encouraging leagues and arenas to use their software and events. That way rinks don’t have downtime, and leagues can be managed better. This would allow rinks to be open more and build a community of hockey players. If this happens, and more arenas  / leagues start to use the Hockey Community league and tournament software, then you would be able to have your own HockeyDB style page but on Hockey Community. These new additions, while they are in the near future, are very exciting!

Hockey Community is growing! It keeps on matching players to games all over the world. This app is helping every one of all skill levels and backgrounds connect and play the best game. The best thing about Hockey Community isn’t just for finding games, it’s an app that gives players the ability to help grow the game of hockey. That is something we all can love!