So we usually know the basics of a hockey stick curve and what we like, but if you’re looking to switch it up or get a free stick with a different curve. We’re going to go over some of the basics of the hockey stick curve and how to use each one. Not every playing style suits a particular curve, but everyone has a preference. Don’t let that stop you from trying something new! Choosing the correct blade also depends on how long you like your stick and your stance in your hockey skates.

The Basics of a Hockey Stick Curve

Curve – If you think of a straight line connecting the heel to the toe, the curve is the greatest distance to the blade along that line. The higher the number, the bigger the curve of the blade. If its a “heel” curve it’s closer to the heel of the blade.

Face – The face is essentially the loft of the blade. If you play golf it’s the difference between your 3 Iron and your wedge. A very open can help you raise the puck off the ice or a less open face can enhance puck control.

Toe – There are really only two options here, round or square and it’s more of a preference. A round toe gives you better puck control while a square toe has more blade on the ice for poke-checks or blocking passes.

Length – Again only two standard options here unless you get something custom made, and they’re medium and long. A longer curve gives your blade more contact with the puck when shooting which can help increase accuracy. A shorter blade, however, will allow for a quicker release when shooting.

Lie – Picking a proper lie depends on stick length and personal preference. The lower the lie the further you have the puck away from your body. This is usually defenseman or forwards that like a longer stick. If you have a higher lie, this means the stick is more upright and shorter, for puck handling forwards and defenseman.

How to use your Hockey Stick Curve

Heel Curves: It takes a special breed to master the heel curve. It’s typically defenseman that reach for these for the easy ability to saucer pass. This is because the curve of the hockey stick starts closer to the heel of the blade. The more open the face the easier it will be to raise the puck quickly. It doesn’t matter whether you’re shooting or passing, when you use a heel curve you always want to load the puck closer to the heel of the blade. This allows the curve and get as much spin on the puck as possible. With curves like the P91A (Staal) that have a heel curve and an open wedge face, you need much less wrist action to raise the puck compared to a mid or toe curve. A P02 (Kronwall) heel curve will also tend to shoot the puck lower on slap shots compared to the higher curve length heel curves. Heel curves are less focused puck handling and more focused on passing and shooting.

Mid Curves: These are the most versatile curves as they don’t really favor shooting or puck handling. This is the most popular option as the curve starts right in the middle of the stick. This is where most players like to handle it. It doesn’t matter whether you’re shooting or passing when you use a mid curve you want to load the puck on the back half of the stick. You don’t need to go as far back as with a heel curve. When saucer passing you’ll need more wrist action to get the puck in the air but it still offers a real nice feel. These aren’t specifically used by forwards or defenseman, and really comes down every players shooting and passing style. Players like Patrik Kane and Eric Lindros are a few notables that went with a mid style curve.

Toe Curves: These are mainly used by forwards as they focus more on puck control and a quick-release shot. With a toe curve, your shot will need less of the blade to increase spin and raise the puck quickly. You need more wrist action for saucer passes and top-shelf wrist shots, but the quick release is the biggest advantage. They are designed for a quick release. You control and load the puck for a shot or pass further forward on the blade. Snipers like Ovechkin go for a toe curve and an open face for bigger shots. However,  Backstrom uses a toe curve with less of an open face for better puck handling.

Check out our curve chart here. 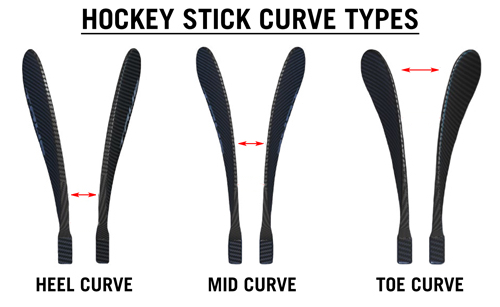 Choosing a stick curve is all player preference. You have to try a couple to really know what you like. Using a new curve is all about where you control the puck to maximize the curvature of the blade and get the most out of your shots. Some great NHL players used unconventional straight hockey stick curves, so don’t think what curve you use defines you as a player.

This article was written by Going Bar Down, a site that gives you hockey skills tips and reviews the top new gear!