Ever wanted to have the ability to get advanced stats like the pros? The ability to see your progression over time with real numbers, and advanced stats, as a hockey player has not been around until wearable devices came out, and even then, it was just whatever your Fuel Band or Fit Bit could track. However, there is one app trying to revolutionize these stats and give all beer leaguers the ability to see their numbers like the pros. That’s where the Hockey Tracker App comes in. By using the Hockey Tracker App, you can track your personal stats and see your development over time!

The Hockey Tracker App has only been around a short time but is quickly gaining popularity. The way it works is that you have to have an iWatch and iPhone. You wear the watch during your games. The watch tracks your movements and feeds those metrics back to the iPhone app for you to view after your game! The Hockey Tracker can track many features including:

With these features, you can get in-depth stats and see your results improve over time.

The Hockey Tracker App is a great tool to have for any beer leaguer! With that said, it is free to try for a week and then it does have a subscription model. It cost $2.99 / mo or $19.99 / year. This small cost helps ensure that the developer behind the app can keep building it and improving it, by adding great features! With such a low cost, its worth it for any beer league player.

The other great thing about the Hockey Tracker App is the main guy behind it! The developer and founder, Gary, has several ways to contact him. He is quick to respond to his community! If you have issues or want to join his community he has several ways. You can join his Twitter or Instagram following. If you’re a bit more into the tech world and have heard of Slack, he has a Slack channel where he communicates with folks there! This is a great way to stay in touch with the developer and the community.

The beer league player needed something like this app and because of it, the beer leaguer has advanced stats! By using the hockey tracker app you can track your personal stats and see your development over time. 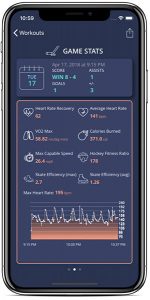