How do you get to work on your game outside the rink without ruining your stick? Street hockey is a great way for some but you don’t get the same feel of the puck and you will most likely trash that $300 stick. You could also use a shooting pad, but that doesn’t allow movement really. Hockey Wraparound, a company that was founded by two former military spouses, solves this problem and more. Hockey Wrap Around provides the opportunity for players to work on their game off the ice without trashing their high-end stick by allowing use on a surface that it’s not meant to be used on, with the end goal of making hockey more accessible to everyone.

How did Hockey Wrap Around Begin?

Matt Eastman and Lee Elias started Wraparound while living in England where their wives served in the United States Air Force. The duo. who had been avid hockey players and people throughout their lives, first met when playing for a Royal Air Force Ice Hockey team. Both entrepreneurial in nature, it was during that time that they came together with the common goal of finding a solution for hockey players to do off-ice workouts with their regular sticks and not be limited by a shooting pad, or have to find ABS sticks or street hockey sticks. By putting their heads together, along with a year of R&D, they created the first version of a protective stick blade cover that could work. Originally it was a metal Wrap Around, but after some tinkering, Matt made the first Wrap Around prototype out of a shampoo bottle. (He still has it to this day). After making this prototype, and with some more testing, they knew they were onto something!

After making the proof of concept, and seeing how well it worked, they decided to move into full production. The Wrap Around first started selling in North America in 2014 and had slow, but steady growth. Lee and Matt continued to Wrap Around from England and then eventually in 2016, moved back to the States. Upon their arrival back in the USA, Matt and Lee committed to each other and their families that they would make Hockey Wraparound a full-time business by the end of the year. They succeeded.

The Wrap Around team attributes its growth not only to having a great product, but also to having great customer service. They pride themselves on making sure that their customers know that they not only care about performance, but also people. There is no better example than during the 2016 holiday season. Lee and Matt found out two weeks before Xmas that HALF of their inventory had been lost. Instead of mailing it in, they decided to reach out to every customer personally to explain what had happened and to rectify the situation. The results were extremely positive! Lee and Matt both believe it’s that story and several others like it, that separates them from not only every hockey company but most other businesses. They pride themselves on their commitment to quality customer service.

In addition to their customer service, they also pride themselves on having a great team. They said that there would be no Wrap Around without the help of Casey, their warehouse manager, and Katelynn, their community manager. Without them, they wouldn’t be where they are today and continue to strive to achieve their goal of making hockey accessible to everyone!

How Wraparound Survived the Pandemic

In 2020 the world was turned upside down by Covid-19. The hockey world was put on pause and rinks all over the world closed. The team at Wrap Around was able to step up and help so many people during this time continue to play. In addition to helping people get Wrap Arounds to continue to play outside, they also donated several hundred Wrap Arounds to different players and organizations and were also able to raise money for those organizations also. Lee and Matt say that they were able to do this because they had five years to prepare to help at a time like that, and between their customer service efforts, their team, and love of the game, they felt obliged to help however they could.

The Future of Wrap Around

The future of Wrap Around is positive and exciting. They see steady growth year on year, have a great team, and continue to innovate. In addition to the original Wraparound, which is now the #1 stick-blade protector globally, they offer a weighted Wrap Around which is a weighted training aid version to help with stick handling and build faster hands. They recently unveiled the DryStick, which is a low-cost portable equipment drying option that attaches to your hockey stick. Lee even wrote a children’s book, When Hockey Stops, with USA Hockey Magazine Mom Christie Casciano Burns to help youth athletes to deal with and overcome adversity. All of these products come back to their mission to make the game more accessible for people around the globe. 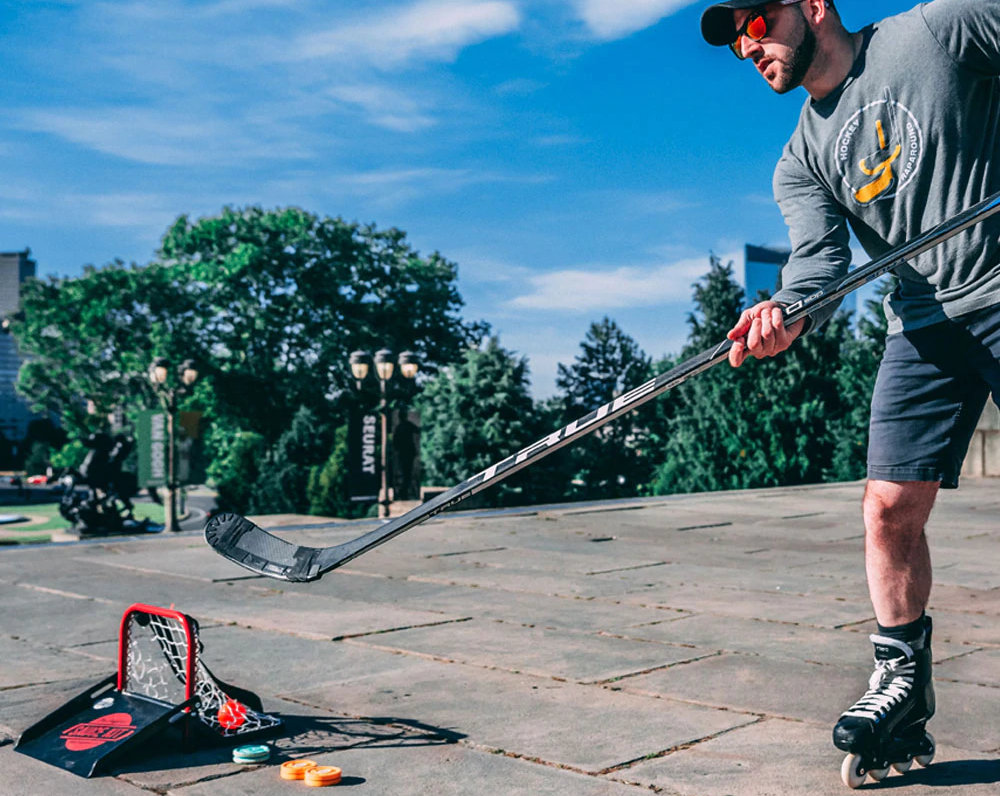 Hockey Wrap Around provides the opportunity for players to work on their game off the ice without trashing their high-end stick by allowing use on a surface that it’s not meant to be used on, with the end goal of making hockey more accessible to everyone. This is a great company with great initiatives that we all can get behind!