If you’re a goalie, and have ever Googled, or searched on YouTube, for off-ice workouts there is a good chance Maria Mountain has popped up in the search. She is an Exercise Physiologist that is helping goalies (as well as other athletes) reach their sports goals, and recover from injuries faster. She has been helping athletes for over 25 years and she is known all over the world for helping athletes of all kinds achieve their goals!

Maria got her start in hockey much like the rest of us. She grew up playing it. However, there wasn’t much in the way of girls’ hockey like there is today. So, she grew up playing hockey in the street and on backyard rinks in Canada. She gravitated towards being a goalie during those pond and street hockey games. She pretended to be Ken Dryden of the great Montreal teams of the 70s. During these games, is where she, like many of us, fell in love with hockey. After college, she moved to defense in a rec league. These experiences of playing recreation hockey would benefit her later by helping lots of hockey players around the world! 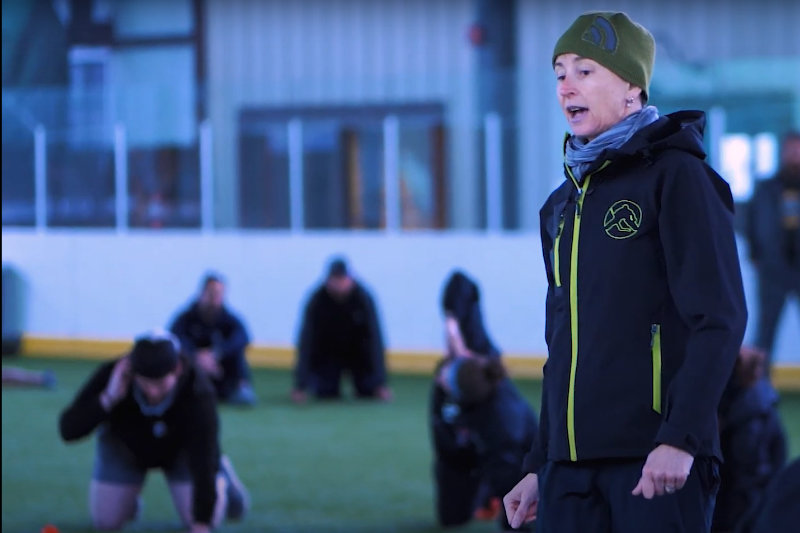 After graduating with an MSc in Kinesiology (she is a Certified Exercise Physiologist) she worked at the renowned Fowler Kennedy Sport Medicine Clinic. She started as a strength coach in 1994 and worked with athletes of all types and from all different sports. While working at the Fowler Kennedy Sport Medicine Clinic, she was given a “lab” and created her “Inside Out Approach”.

The “Inside Out Approach” is a very unique approach. Maria studied how injuries occurred in athletes of all types, from inside the body, and what muscles or muscles were affected. Using this approach, she could help develop specific exercises for athletes and help them recover much faster. This Inside Out Approach became very successful. So much so, lots of athletes were coming to Maria. The clinic created a membership program so that athletes could still come to see Maria for help even after rehab ended.

Maria was helping many athletes. In addition to helping athletes recover from injuries, and rehabbing them, she began helping on the side as a strength and conditioning coach for Western University. She was so successful with that, that she started another business, Revolution Sports and Conditioning in 2005. It was with this business, she could help even more athletes. Maria was seeing all different types of athletes, but hockey players were some of her most common clients. She wanted to keep working with all types of athletes, but she also wanted something specific for hockey players.

Goalie Training Pro started in 2012 and is one of the main go-to resources for goalies to get off-ice workouts, on-ice workouts, and tips on how to prevent injuries, strengthen muscles and get a wider butterfly (Download ButterFly Challenge). In addition to all the free content, she has a few different courses that folks can subscribe to in which you work directly with Maria to help achieve your goaltending goals! 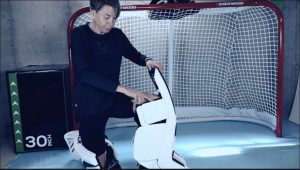 Goalie Training Pro is growing! Maria is finding new ways to reach people. A few years ago Maria started playing goalie again and it has only helped her gain more knowledge of the goaltending position. In addition to growing her business by playing goalie, she also does an Instagram live almost every Thursday at 1:00 pm Eastern where she answers all your questions!

Maria also sold her old business of Revolution Sports and Conditioning to focus even more on Goalie Training Pro. This has allowed her to have more time for Goalie Training Pro, which is great for all goalies!
Although Maria spends a lot of time training goalies, she also gets to train other athletes. This year, she got the opportunity to work with a few members of Canada’s Olympic squad (one from the women’s soccer team and a decathlon athlete). Maria loves helping athletes of all types from beer league to NHL and everywhere in-between. If she can help you achieve your goals, then she views it as a success.

Maria and her programs are all about helping goalies (or other athletes) reach their goals. What you do off the ice can help impact your on-ice performance, and Maria loves to work with anyone from beer leaguers to the pros!