Dull skates… nothing could be worse, maybe being out of tape or forgetting your jock or jill, but dull skates are up there! Ever wonder what is truly a skate sharpening? What does it mean when you get a 1/2″ cut? This short article will help explain some of the basics of skate sharpening and provide some images that are on Blackstone’s website for reference.

The first thing to know about skate sharpening is that there are two edges on a skate blade, an inside edge, and an outside edge. (Most hockey folks know this but some folks still ask) The edges, based on your sharpening, either form a regular U shaped hollow down the center of the blade or a squared U or V-shaped hollow. If it is a regular U shaped, then it is a “traditional” sharpening. It is the most common sharpening and there are many different depths of cut. The closer to 1″ you go, the least shallow it will be. While the closer to 0 will be the sharpest. If you have a squared U or V cut, then this is what is known as a Flat Bottom V (FBV) cut and was created by Blackstone. The FBV offers players to get a bit more glide out of their runners / blades as the hollow is squared off and not rounded allowing less drag. (Read more about it here!) Some players say they notice a difference, while some do not. Out of the players I have talked to, they say they really like it! However, not every hockey shop offers this type of cut, so be sure to ask if you are looking to try it out.

The second thing to know about skate sharpening is that there are several options on how sharp you want your skates. As mentioned above, the closer you get to 1 inch, the less sharp and the closer you get to 0 the sharper it is. For example, when I worked at a pro shop, 1/2 was our “standard” cut. Depending on where you go, there are several options. The shop I worked at had the sharpest option of 3/8 and the option with the least amount of sharpness of 1 inch. We offered a few other options including 7/16, 5/8, and 3/4. We also offered all of those cuts in an FBV. Again, it all varies on the hockey store and what kind of cut’s they can do.  It might take a few times to figure out what works best, but just know that you have several options!

The last quick note about skate sharpening is when or how often should skates be sharpened. It is personal preference and really depends on how often you skate. It can sometimes depend on what level you play too. Another thing to consider is your steel, better quality steel like Blacksteel, Step Steel, and Bauer LS3 is a better steel and can stay sharper a bit longer. Getting your skates sharpened for every six to ten hours on the ice, can be a good way to ensure you’re not out there with dull skates!

Dull skates suck! So remember to get your skates sharpened frequently. Perhaps if you’re still new to the game you can try a new cut or if you’re an experienced player, try the FBV cut! 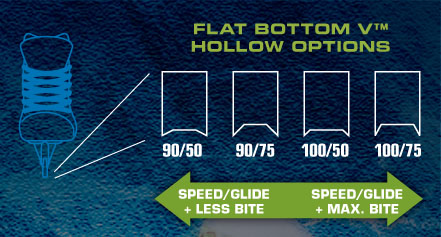 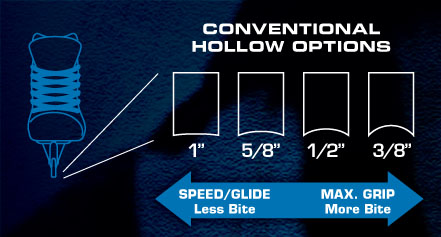