STÄRK Hockey – Made For Girls

STÄRK Hockey was started in 2017 by Michel Paul, a person who’s been in the hockey industry for years! He founded MIA sports (one of my favorite gloves of all time), was brought on as an R & D Director at Warrior after selling MIA to Warrior in the mid-2000s, and then was the VP of SherWood. With all this experience, he noticed that girls’ hockey was growing and yet no other company was really making equipment just for them. 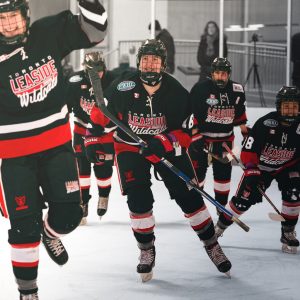 Michel started STÄRK by seeing that void in girls’ equipment. STÄRK’s first products focused on girls. They offered gloves, and pants that fit differently than what was coming out of bigger companies. Their equipment offered tighter fitting gloves, and tapered shoulders and pants that would help female players feel more comfortable than the traditional equipment. In addition to this, STÄRK stands behind giving players what they need at a price that they can afford.

Since starting just a few years ago, STÄRK Hockey has been growing. In addition to being known for their girls’ equipment, they have also gotten into sticks for girls too. The sticks offer a normal length but smaller flexes so players don’t have to compromise by using a correct length stick but with too high of flex. They also have expanded their equipment offerings to guys’ equipment and sticks too, which has really boosted STÄRK’s presence in hockey!

STÄRK has grown quite a bit over the past few years. They have a few different product line options and price points like every brand. Their MFG (Made For Girls) is exclusive as the name would say, Made For Girls. Then, they offer a line called STÄRK Naked and it’s equipment in the purest form. It is a quality line without needing any extra bulk or gimmicks. Then their final line is called Dump and Change. This line is for the new player or beer league player that just needs great equipment at an affordable price! So no matter what level you play, they have you covered!

In addition to building out several product lines, they have built out a passionate fanbase. They seek out customers to get feedback and ideas for changing, updating, or creating new products. Their feedback helps them make STÄRK better. They don’t rely on sponsor pro suggestions, they have talked to hundreds of players that use their equipment to see what they would like in the next model.

This type of grassroots research has built a loyal customer base. It’s because of this, that STÄRK is now one of the premier sponsors of the NWHL. They have several girls on the Boston Pride and Toronto Six wearing their equipment! In addition to being seen at one of the top levels of the women’s game, they can also be seen on players in college and they have a few organizations using their bags, warmups, or other equipment. 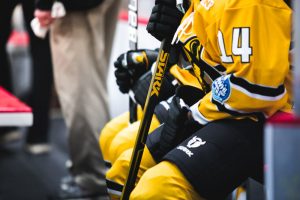 The future of STÄRK is bright. They have grown over the pandemic, and have started selling online. In addition to online sales, they are in Pure Hockey and small hockey shops across North America. They are getting to be known as the premier brand in the women’s game and are quickly growing in that space! STÄRK keeps expanding product offerings, and will be coming out with a new style of women’s shoulder pads later this year! This small company in just a few short years, even with a pandemic, has been very impressive!